With a focus on rare diseases, inclusion and disability, BookLab publishes scientific books for the public. Our publications are developed in collaboration with scientists, artists and writers. Available in several languages, many of our publications are distributed for free in numerous countries. For more information, download our catalogue. 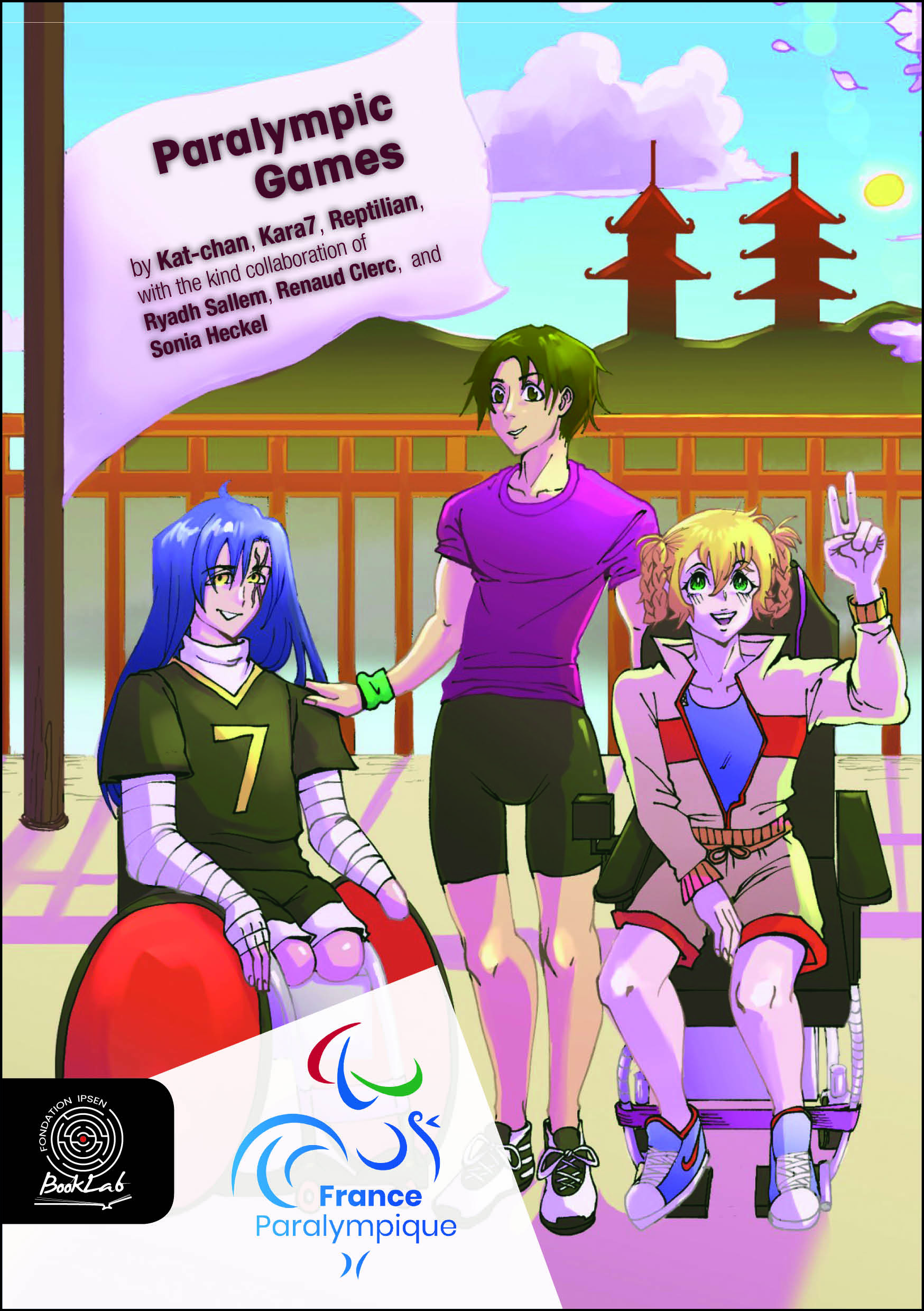 This new manga trilogy, dedicated to the Paralympic Games, was produced thanks to the support of France’s Paralympic Sports Committee and in collaboration with three French Paralympic athletes. Renaud Clerc (athletics), Sonia Heckel (boccia) and Ryadh Sallem (wheelchair rugby) met with Kat-chan, Reptilian and Kara7. From their collaboration together, three original stories were born: Race of a Lifetime, Boccia Mountain, and Transformation, brought together here for a special edition, and printed for the Tokyo Games.

The book series will also soon be available in French, Japanese and Spanish.

“The French Paralympic and Sports Committee (CPSF) leads France’s Paralympic team to the Games. Paralympic manga are a unique opportunity to discover and learn more about sports that are still mostly unknown. And, through an original medium, linking the Tokyo 2020 Olympic Games with those of Paris 2024, along with all Paralympic athletes.”

“Becoming an Olympic or Paralympic athlete requires total commitment of time, of heart, of intellect and spirit. Athletes who perform at this level are heroes. Join us in these manga books inspired by real life Olympians, and learn what it takes to become the best in the world.”

Reptilian (with the kind collaboration of Sonia Heckel)

Suffering from a rare degenerative disease which gradually paralyzes her, our heroine finds her strength in the sport of boccia – providing her with the will to fight and always surpass herself in order to reach the top by completing the Paralympic Games.

At the age of 20, Céline Gaudet decided to transform her passion for manga into a profession. She left Montreal to take courses under the direction of a Japanese manga teacher, at AAA-Ecole de Manga. She writes under the pseudonym Reptilian.

Sonia Heckel, a 31-year-old athlete from Nancy, France, has myopathy. This genetic disease prevents her muscles from regenerating, which, since the age of 13, has required use of an electric wheelchair. Sonia has been practicing Boccia since she was 18. She immediately fell in love with having to fight to ‘’score a point’’ and quickly understood that this sport suited her perfectly. To date, she is a triple French Champion, with her sports assistant, Florent Brachet, and European Team Champion. In parallel to her sporting career, Sonia is an Accounting Secretary at Vandoeuvre Nancy Volleyball.

The Race of a Lifetime

Kat-chan (with the kind collaboration of Renaud Clerc)

Between friendship, jealousy, competition and handicap, relationships are built and torn between athletes until they reach the Paralympic dream.

Passionate about sports, and French champion at the age of 18, Renaud Clerc is defined by four words: resilience, effort, sharing and hard-work. A law student, this disabled athlete keeps his eyes forward. At the end of the race, perhaps a medal at the Paralympic Games? And, without a doubt, the beginning of new challenges.

Kara7 (with the kind collaboration of Ryadh Sallem)

Confined to a wheelchair following a life-changing accident, a former boxer turns to wheelchair rugby in order to rediscover his taste for competitions and victories. Claiming to be concerned only with the future, an exceptional situation will lead him to reconsider the road traveled.

Fascinated by manga’s history, its features, and in particular, the originality of animation, Kara7 grew an interest in drawing manga. After obtaining her baccalaureate (France’s equivalent of A-Levels), she decided to study at the AAA-École de Manga, thus beginning her adventure. Kara7 has been illustrating ever since, notably on social media (https://fr-fr.facebook.com/karasept/).

Ryadh Sallem is a high-level Paralympic athlete, and initiator of humanitarian and associative projects aimed at combatting all forms of discrimination. President of CAPSAAA, organizer of the Defistival and of societal and cultural conferences, he is also the initiator of Educapcity, a large urban rally dedicated to 8-14 year olds. He also serves as a consultant to companies and the media, member of ROSIF and APELS, administrator of VIVRE FM, the Gécina Foundation, and Associate Manager of “Séquences Clés Production”…all to promote fraternity and living together in peace.